Today we have the displeasure of introducing a nazi podcaster who was mostly anonymous hosting Night Nation Review… until now. He has flown under the radar, but like all nazis he couldn’t stay hidden forever. With that, let’s introduce Nicholas Jonathan Gregory of Kannapolis, North Carolina. Welcome to the Sunlight “Night Nation Nick”! 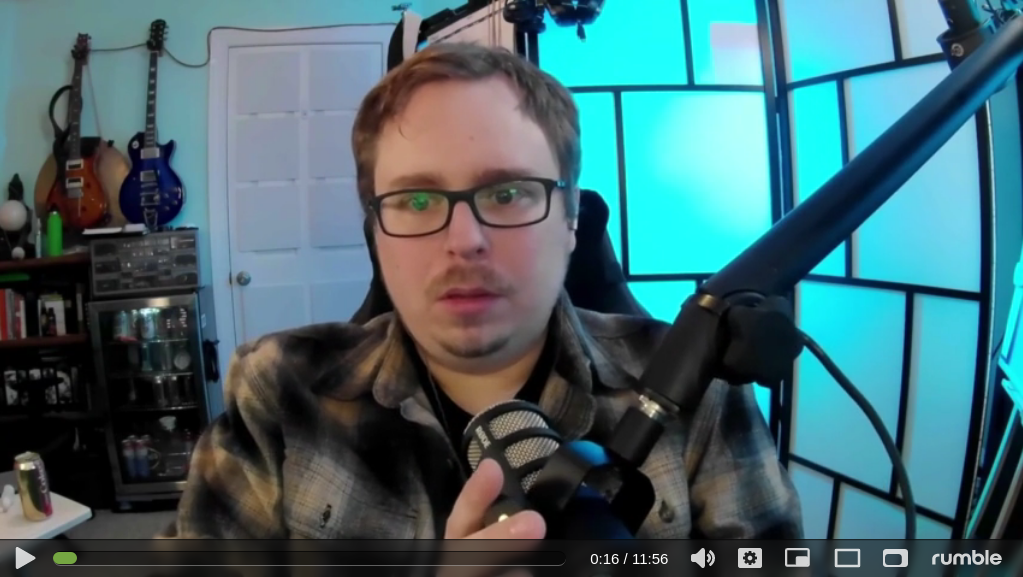 Nicholas Gregory on his “GregoryiMedia” channel on Rumble [archive]

Nick and and his podcast Night Nation Review drew our attention with blatant racism, transphobia, antisemitism, and more – so we decided to take a long look. And long it was, as this loser streams for 5 hours a day! First, though, let’s check Nick’s early Twitter accounts @njdigregorio, @NJGregori, and @GregoriMedia, which are all suspended. Why, you might ask?

Likely because Nick J. Gregory calls for Civil War, advises his followers on how to prepare for a “race war” and wants “the rope” to be used on public officials. 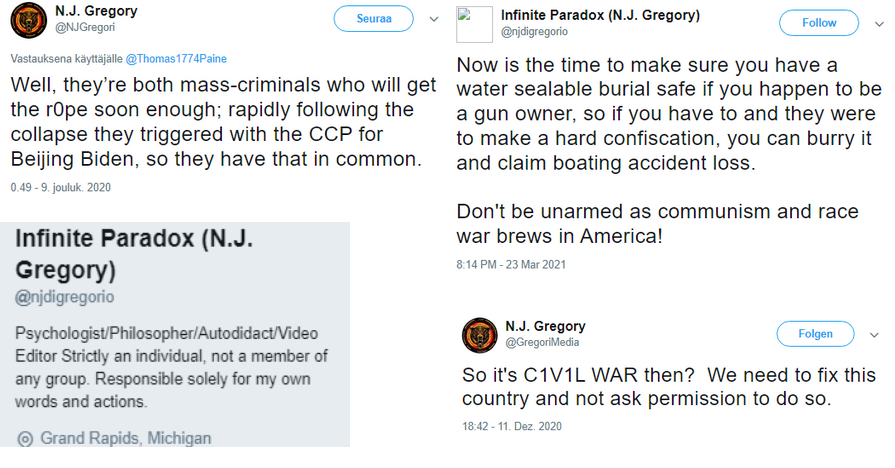 Nick has a history of making extremely racist and antisemitic posts online, constantly blaming Jews while using the triple parenthesis echoes “((( )))” and posting extreme abuse against Black people and other minorities. In these tweets, Nick calls for the removal of Jewish people from the country, and in another refers to Black people with a slur. 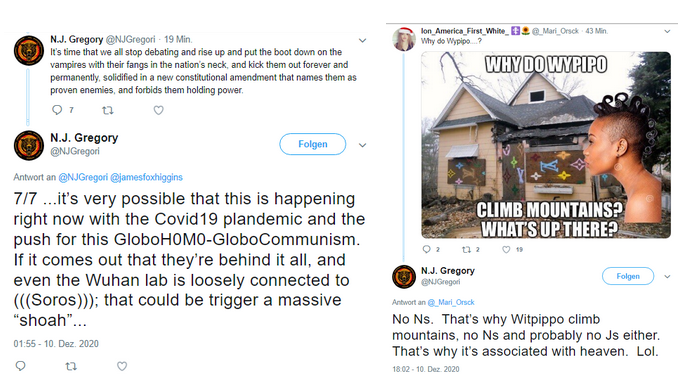 The archives of violent and antisemitic tweets are endless, but his show “Night Nation Review” is so much worse.

So, what is Night Nation Review?

Night Nation Review is a web show self described as a “Euro-American ethnonationalist media review show” for those who oppose “Judeo-Globalists,” which is true, as it is a neo-Nazi show that is incredibly antisemitic. 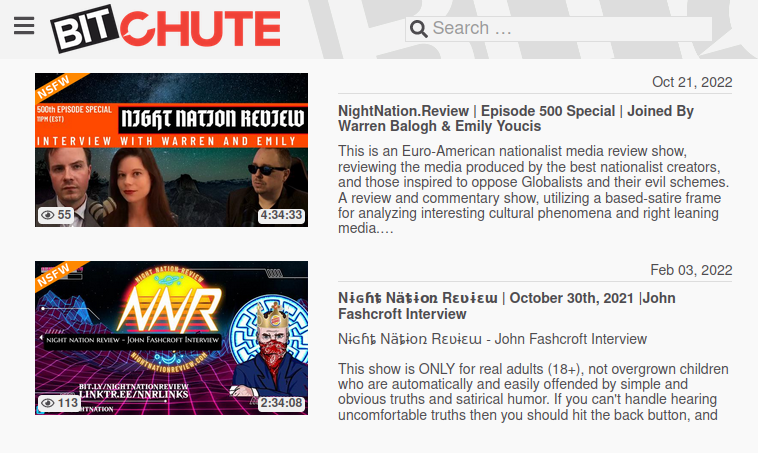 You’ll also find claims of the show being satire posted on every piece of social media Nick Gregory creates, but Nick doesn’t seem to understand the meaning of the word. The content Nick Gregory posts only serves to spread white supremacist talking points without a applying a critical view on the ideology itself. The “satire” claim is only used to dodge accountability.
Nick is very sensitive to trolling, and frankly, is afraid of antifascists. Before the recent suspension of his main account he had every AFA crew blocked, a really brave move from a descendant of the “master race.” Nick locked down @nocturnnation and changed handles frequently to avoid being reported, but eventually lost his account for hateful conduct. 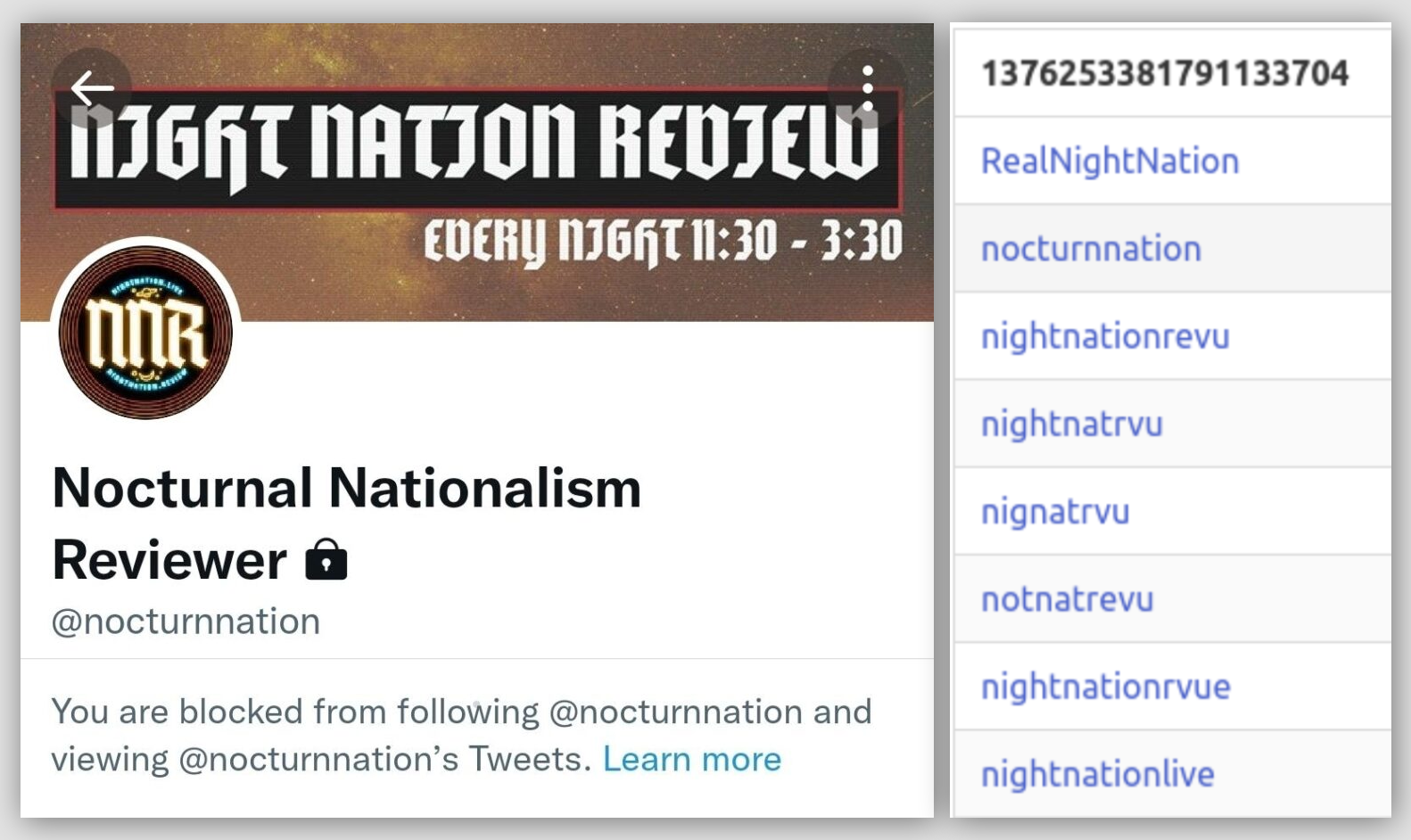 After the suspension Nick made a video to complain about Twitter. In his own words he claims, “White people are oppressed by Jews in the United States.”

As pathetic as Nicholas Gregory is, his connections are undeniable, especially to the National Justice Party (NJP). The NJP is a racist and antisemitic political party formed by white supremacists, and one of the leaders – Warren Balogh – was a guest on Nick Gregory’s 500th NNR episode. Balogh’s wife Emily Youcis aka “Pistachio Girl” was also present for the show, previously gaining her reputation for being fired from her Philadelphia Phillies food vendor job over racism and antisemitism.

Here’s a clip or Nick, Warren, and Emily, where Emily talks about “the Jews” and how her university was surrounded by “a sea of n*****rs.” Chat also contains slurs.

Although Nick’s content is hosted on his own website, he casts a wide net and spreads his media on multiple platforms hospitable to neo-Nazis to include Bitchute, Odysee, DLive, Killstream among others, and fears losing his platform at any given time.
As previously mentioned, Nick uses a satire label to shield his beliefs in public, but the mask slips off frequently. In the video clip below Nick gets really worked up about a user called “Based Takes” and can’t help but spew antisemitism while whining about them.

How do we know that this Nick is Nicholas Jonathan Gregory?

Nick was kind enough to file a DMCA (Digital Millennium Copyright Act) video takedown request while using his real name! Big brains on this one. A name wasn’t nearly enough so the sleuthing skills began. Through a tip we learned that Nicholas attended Eastern Michigan University; however there is also someone else with the same name who went to the college and we needed to make sure we had the right one. We searched and immediately found the nazi’s ResearchGate profile. 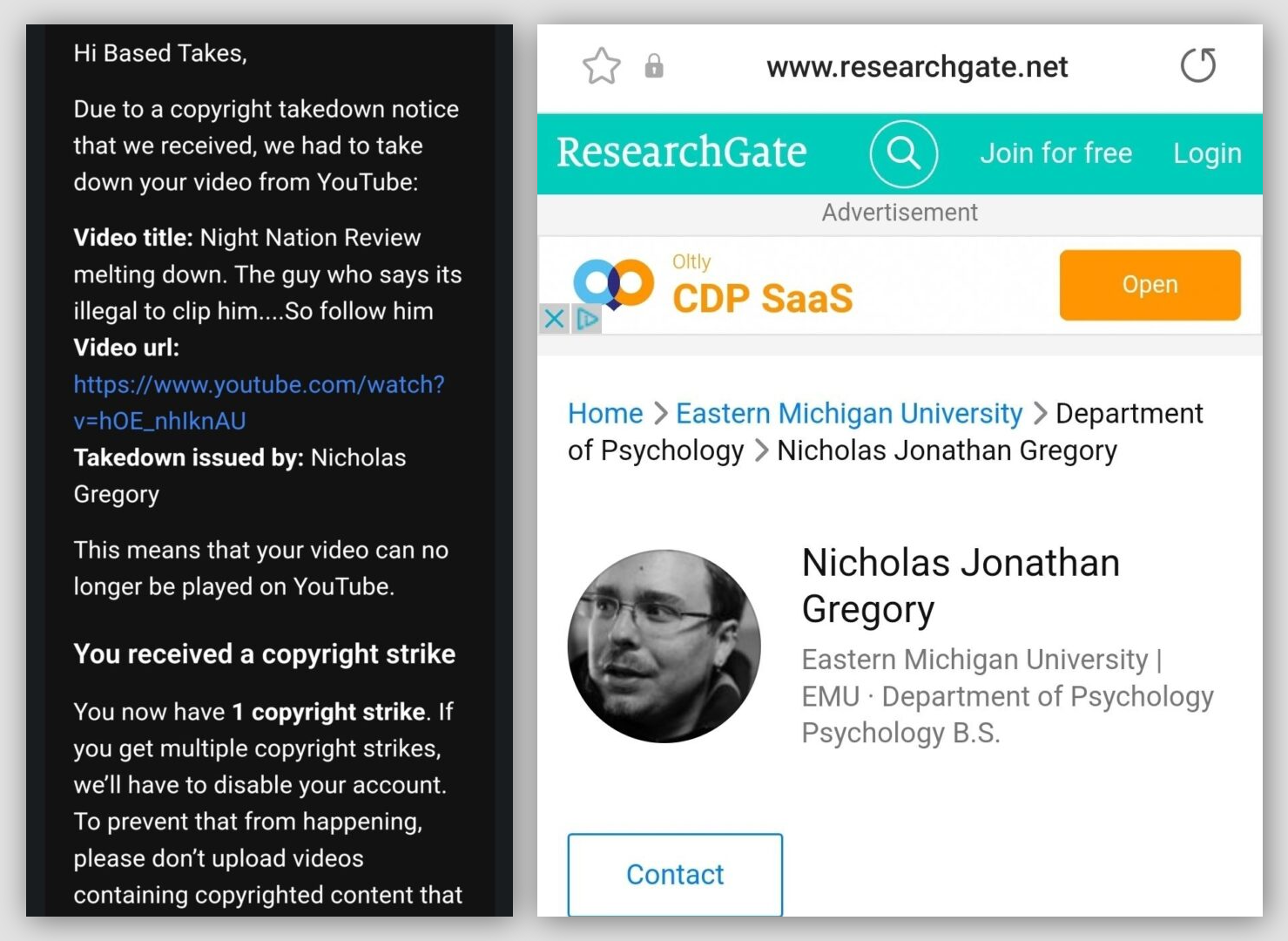 In addition to the horrendous opsec of using his own name for previous Twitter accounts, we noticed that Nick had his full name in the URL of his Behance account. The mention of “Psychologist” in the bio of the GregoriMedia Twitter account also helped confirm that we had the right person. 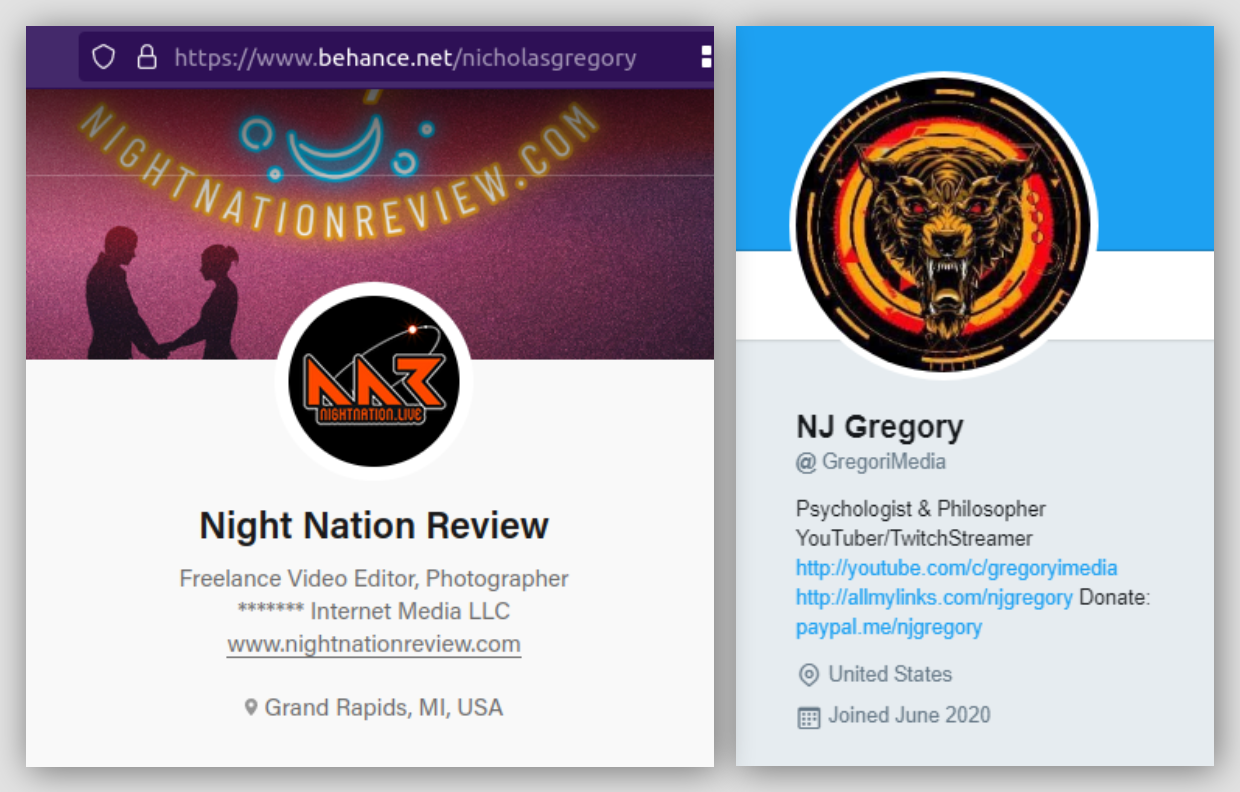 But where is Nick located?

On his stream and on old Twitter accounts, Nick has hinted at being in both Michigan  and Florida, but nazis lie so we needed our own confirmation. Nick’s parents Diane and Jonathan own multiple properties in Michigan, so our next step was finding out where Nick’s doing his nazi shit from. We came across Nick’s fathers LinkedIn which shows him living in Kannapolis, NC working as VP Global Operations with TC Connectivity ICT Business Unit. They recently bought a home (under mom Diane’s name) in Kannapolis. 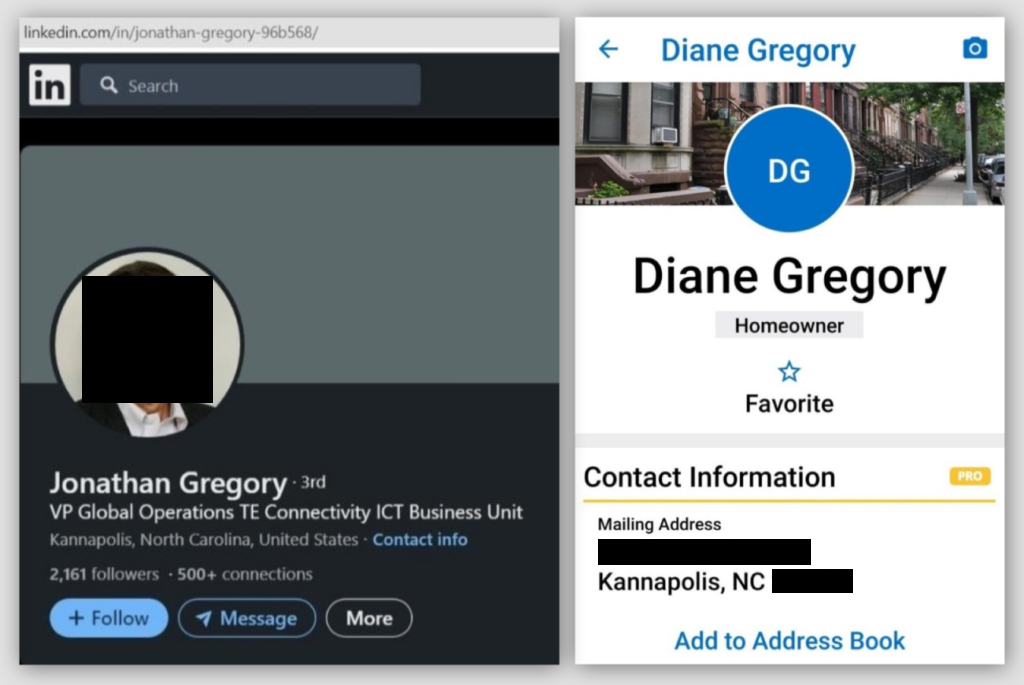 But where does that leave Nick? Luckily for us, Nick has a HUGE ego, so a small compliment in the comments of his show with a link gave us what we needed. This pathetic grifter moved with his parents. 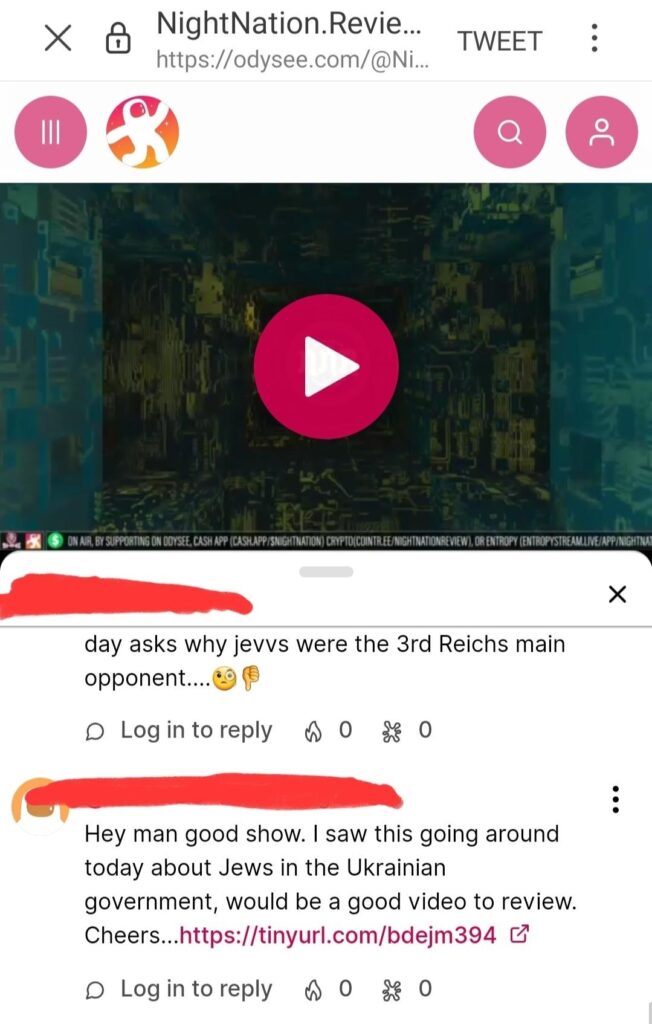 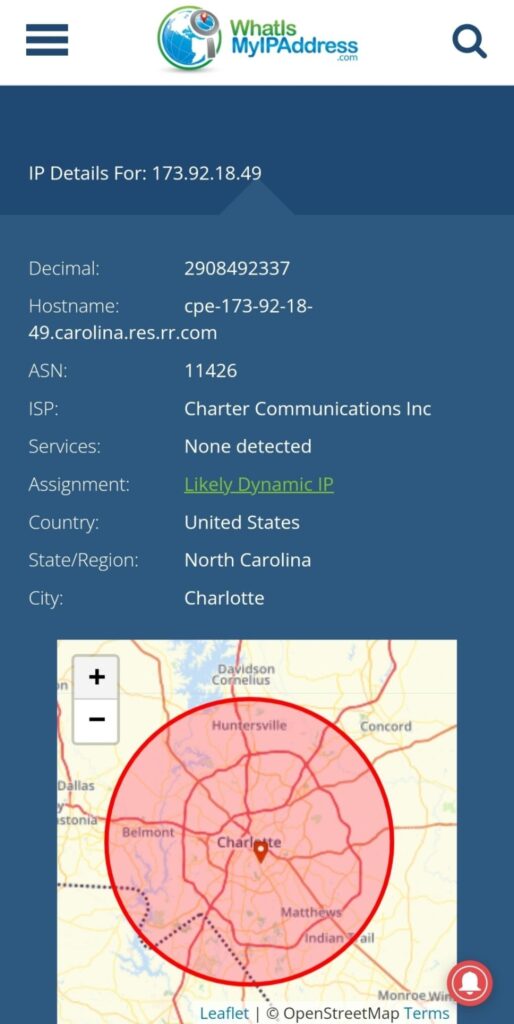 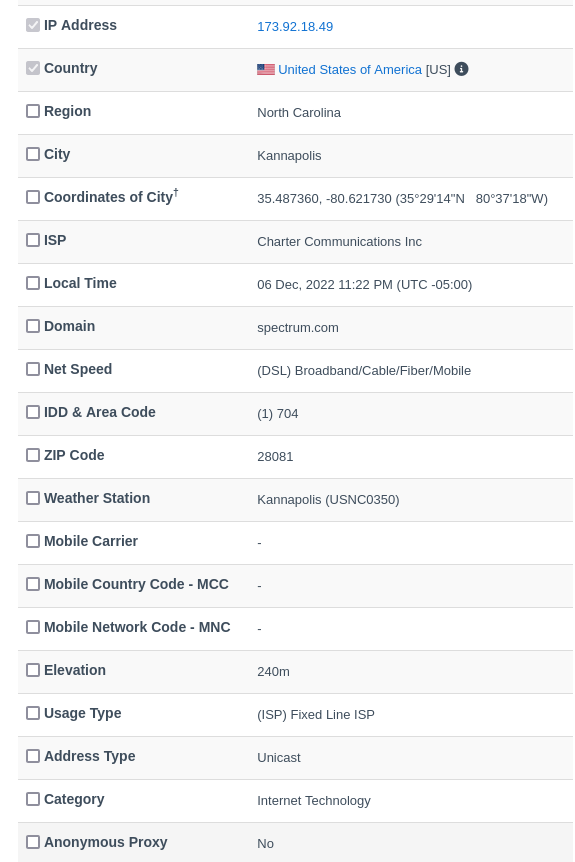 Due to his rhetoric becoming more and more extreme recently, especially towards the Jewish community, in which he openly advocates for the elimination of Jewish people from American society, we feel it is time to make this Hitler wannabe public. Nick preaches accelerationism, and although Nick might be too much of a coward to do anything on his own, his audience seems willing to act. 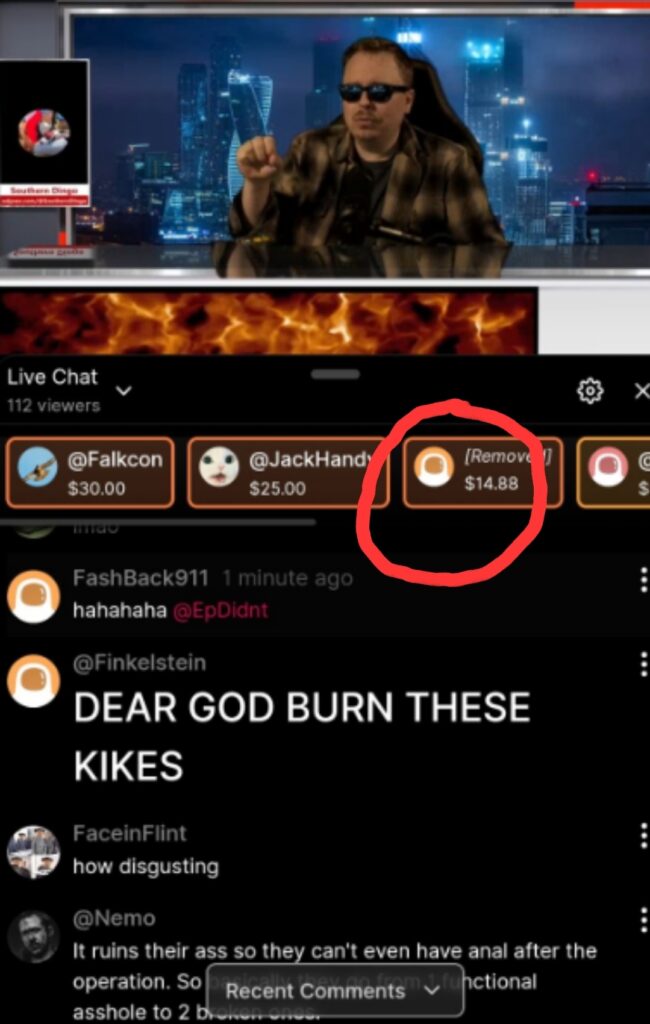 Another major cause for concern from Nick is in this video below. As our community grieves, we hate this nazi spreading the exact language that will get people hurt. This video is Nick giving out advice how the next mass shooter can cause more damage.

Nick’s videos have only gotten progressively worse, calling for people to be wiped out.

Firstly, alert everyone in North Carolina about Nick’s racist activities.
Here is a flyer you can post or distribute: Link
Then politely alert all of the services this nazi is using for profit about his racism, antisemitism, and calls to violence.

Sunlight is the best disinfectant, we will never stop exposing violent hate where it threatens our communities. We Protect Us.

Please send any tips to sunlight161@protonmail.com